Everyone likes to be praised. But how many people like to have their weaknesses pointed out to them? It can be embarrassing, awkward, and upsetting. However, it can also be the most valuable tool for improvement.
Opening yourself up to receive feedback is hard.
Long ago, when I was 13 or 14, I used to design in my own bubble. At that time, I never thought of myself as a designer or a creative person, it was just something I did in my free time for myself. I would create digital collages and images, and put them in places that only I would see. I was afraid people would see them, and I was even more afraid that people would judge them.
I got my first experience designing for others when I joined the concert programme team in my school orchestra. We had to produce the programme booklet that introduced the orchestra and the songs we were playing. Someone had to play the role of artist. Reluctantly, I admitted that I knew a little about image editing, and so the job of designing the booklet’s cover fell to me.
Showing my first drafts to my peers and teachers was a harrowing experience. I was terrified that they would look at it and decide that I, as a person, wasn’t good enough for their expectations. I wasn’t able to separate my design from my identity.
The feedback itself wasn’t as bad as I imagined. But this feeling continued through my early design days when I dabbled in some design work here and there for school clubs and events. When someone criticized a certain aspect of my work, it left a bitter taste. I knew in my heart when my work wasn’t that good, and it was hard to have that acknowledged and made real by someone else. However, after having some time to pour over what they said, I found that I could usually produce a much better design, that I could be proud of.

Feedback on the not-so-great poster on the left for my school’s prom led me to create the series of posters on the right, which I still feel pretty good about today, 8 years on.

A culture of feedback
I had first-hand experience on the positive impact of creating a culture of feedback in my last year of undergrad studies, where I took a module on single camera production. The class had been split into groups of four to five people, and we were to film a four- to six- minute short film. We had to present our work-in-progress to the class every week: starting from as early in the process as the script, to the storyboard, to the parts in production. The whole class was to give feedback on each other’s work. The rule was to talk about one thing we liked about the work, before saying anything that we think could be improved. The presenting group was also encouraged to ask for specific feedback on parts of their own work that they weren’t sure about.
We found that the feedback really helped. In this safe space created, we were all of the understanding that the feedback was directed towards the work in order to make it better. It became easier to distance ourselves from the work and look at it critically by itself. Where were the parts that people liked, that we should keep? Where were the parts that were confusing? Were there parts that could have more impact? Did we convey what we wanted? The point was that it was not a blaming session, nor a session to point at people, but to look at the result of the week’s work and identify what we could do to make it better.
The good vibes in the class was fantastic, and extended even beyond class hours. While we were rushing our cuts in the lab during our free time, we would help each other out by asking for feedback on short segments. We could be sure that we were receiving honest responses. The results were amazing. With zero experience when we first came in, we produced what was, in my opinion, more-than-decent short films, in less than 2 months. Below is the film from my team.

Building the culture of feedback
From the time in my Masters’ study, agile coach Al Sinoy facilitated a 360 retrospective for one of my project teams. (Read about it here: http://blogs.thecdm.ca/berrygood/2017/06/28/release-retrospective/) We started by mapping out our team’s journey and milestones, then we took sticky notes and wrote how we felt at each stage. We used that to identify broad themes to improve on our processes, and put that into actions to perform going forward. Next, we went down to individual team members, and everyone in the team spoke up on what they thought the strengths of the person were, where they could improve, and ideas on how they could improve (very important!).
I found that the team retrospective is an incredibly useful tool to create a safe space for airing concerns and giving honest feedback, with the aim of improving the whole team. Recently, I conducted the same retrospective for my team over at Barter Bay, and it translated really well. Besides getting to know each other even better, and being aware of each other’s working styles, it also opened up the floor for feedback-giving even outside of team meetings.
The most important thing we got out of the retrospective was to establish the understanding that any criticism given is in good faith, with the aim of helping each other improve. 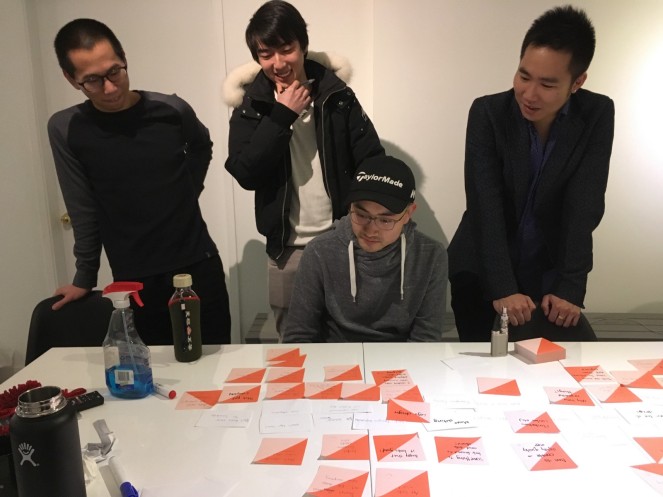 360 retrospective for the Barter Bay team

Someone who is willing to spend the effort to give you constructive criticism is a gem — hold on to them tightly!!
Giving a word of praise is easy, and only takes a few seconds. What is much more valuable are people who are willing to really look through your work, think about it, and spend time to discuss with you the parts that they think are good, and the parts that they think can be improved. A hundred fans will make you feel good, but they won’t make you improve as much as one person who looks at your work critically.
I learnt this from interacting with a friend who is extremely proactive at learning new things. He is the one who got me interested in Illustrator and After Effects, while I got him interested in programming. We are always sharing our projects with each other, and giving feedback on what we honestly think. In the process, we inspire each other to try new things as well. It is very, very motivating and exciting.

It is only because of this friend that I learnt to make these super cute animated emojis, by re-drawing google emoticons from scratch in Illustrator, and then animating in Animate CC. And now, these illustration and animation skills have come into handy, earning me projects as a designer and an animator.
Giving good criticism is also very much a skill that is learnt with experience, and it also improves your own creative skills. From looking closely at others’ works, you will learn how to critically look at your own work. However, oftentimes it is still good to have a fresh eye looking at your work, because you may be so familiar with it that you’d be blind to its flaws — fellow UX designers would know that all too well!
Finally, know that it’s ok to not be perfect.
I’m not saying that I can completely isolate myself from my work when receiving feedback. When my team talks about parts of my design that they think can be improved, my first instinct is to be defensive. In fact, I often reject their suggestions at the onset. However, I take their words back to my desk, ponder over it, and often, I find that they are right, or that there is an even better solution. Other times, I find myself right, but the feedback is still useful as it forces me to think rationally on why I did things that way.
My takeaway message would be, it’s ok to admit to yourself that you’re not perfect. Feedback helps you to become a better version of yourself.